Whoever is spamming WN with comments do yourself a favour and stop wasting your time. All comments are moderated and it just took me 3 seconds to delete the 100 or so waiting for me.

Changing the subject I used to feel a bit guilty and slightly ashamed that I could only speak one language fluently. My time in Asia has eroded this guilt mainly due to the fact that the whole continent seems hell bent on learning it.

I had a chat with an Expat Brit the other day who seemed convinced that English has become so prominent because of our little country. Well perhaps this was the case 100 years ago at the height of the British Empire but not now.

I tried to explain that America and its global dominance in just about everything (World Cup aside) is why Indonesians love talking to us and Japanese spend lots of money sending their children language schools!

Here’s a little fact for you to finish off with. Did you know that we might have all been learning German now and watching Hollywood films with English subtitles? Apparently there was a discussion a few days after US independence whether they should adopt English or German as the national lingo. Good choice made. 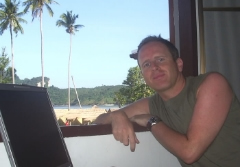