Sin City, the city of lights, the metropolis in the desert, call it what you like but one thing that is undeniable is that Vegas is one of a kind! Is it a digital nomad destination though?

Well for starters it’s in the United States which is far away from being a good nomad country. This is mainly due to the high cost of living throughout the country, peaking in California and the New York area.

Also the visa situation for those not from North America is not that friendly. Most countries passports will get 90 days but typically you will have to leave the North American area (USA, Canada and Mexico) for another 90 days. However it wouldn’t be an issue if you only wanted a shorter stay in the US.

So why Las Vegas?

Vegas has a lot going for it because how else would have come to be one of the fastest growing US cities of recent years. It has everything you’d want from a large city as well as a sublime climate for most the year. June through to August can be oppressively hot in Vegas but being in the desert it’s the kind of tolerable dry heat as oppose to the sticky heat of cities like Houston.

The location of Vegas also sets it apart as it’s not too far from coastal California but also nearby to many national parks and of course the grandest canyon of them all!

The international airport is one of the busiest in the US so getting anywhere in the country or further afield is not an issue.

Vegas is of course most famous for it’s strip which is lined with casinos and huge hostels. In fact some of the World’s largest hotels occupy prime spots on the strip. 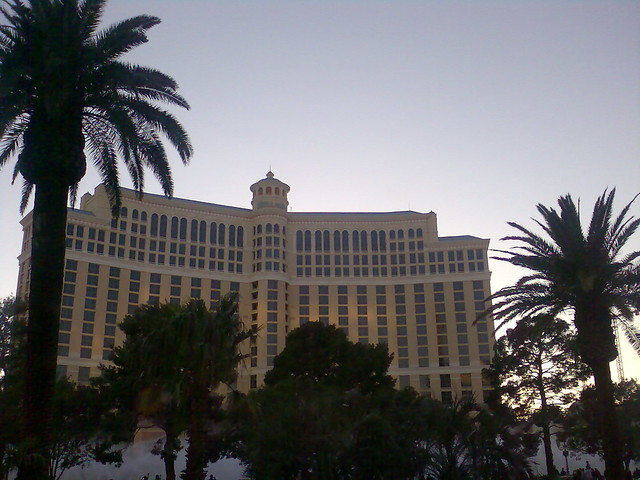 Wouldn’t Vegas be expensive for a digital nomad?

Vegas can be surprisingly affordable, even on the strip although ideally you’d live away from the nightly carnival!

Because of the high turnover of staff that work in Vegas finding temporary accommodation can be fairly straight forward, indeed there are many listings on sites like Air BnB and Craigslist. You could actually stay in a hotel on a night to night basis if you stayed away from the strip. If you have a larger budget then you could easily afford to stay in the strip and find yourself in a huge suite for less than $50 per night. There are not too many North American cities where you could do that!

In terms of eating there is so much choice. The strip buffets are not great value but can be nice for a one off. You don’t have to wander too far from the strip to find affordable eating places.

In terms of finding places to work, well there are cafes galore in Vegas, both in the downtown and strip areas. Everywhere you look they’ll be a Starbucks that generally offer free wifi throughout America.

The hotel suits can be so big that you might find it works to actually have your temporary office in your room.

There are some obvious reasons not to consider Vegas if you are a digital nomad. If you have a problem with gambling then certainly it’s not the place to be, similarly if you don’t like crowds or you like to be by the coast.

Vegas though is a very lively place and it’s open 24 hours will appeal to many people. There are also lots of opportunities to have fun in your leisure time with a legendary night life and bar scene.

Overall Vegas might not be such a bad place to run your business from particularly if you are a US resident as you could base your business in the state and equally choose to be a nomad elsewhere for part of the year.

God damn the whole world is in vegas.